In my new life as a mommy, I finally have some time (during nap time) to get back to something I love…cooking.  I’ve been busy pulling out old recipes that I used to make all the time and also trying out some new ones.  I have a serious sweet tooth, so I have naturally focused on sweet treats to start!  Here are two of my new favorites:

Inspired by my mother-in-law, I have started making rice pudding.  I had no idea it was so easy to make!

Put everything into a pot and bring to a boil.  Then, lower the heat to med-low and cook until rice is soft. 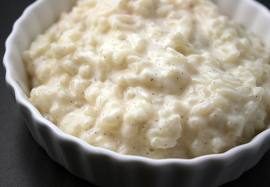 I was so pleased that this recipe worked well with a non-dairy milk. The vanilla in the coconut milk gives the pudding a great taste.  I tried a batch using unsweetened coconut milk and I didn’t really care for the taste of the pudding.   I’ve also tried this with a pinch of cinnamon instead of the orange rind.  It changed the taste of the rice pudding completely and I liked it just as much. 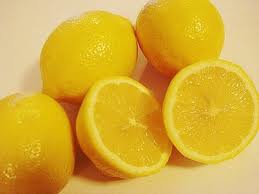 I truly love the taste of ice cream.  However, being fairly intolerant to dairy, it’s usually not a good idea for me to indulge in ice cream. Fortunately, I can easily have things like yogurt.  That lead me to try out this recipe for a Lemon Cream last week.

juice and rind from 2 lemons

I mixed all of this in a blender.  I then poured the mixture into a shallow pan and put it in the freezer.  When the cream was almost frozen, I put it back into the blender and mixed it until it turned into a hard slush. Finally, I poured this into a container and froze it.  It has turned out to be an excellent low-calorie dessert.  Also, since it doesn’t have any water in it, the mixture does not get icy in the freezer.  I love the texture of this dessert.