I’ve been trying to expand my cooking repertoire recently.  Specifically, I’ve been trying to make things that require less gluten, less sugar and in general, more unprocessed ingredients.  I want our family to eat a bit cleaner.

A recent recipe that I tried was a Lentil Loaf.  Though I’ve never actually made a meatloaf, my guess is that Lentil Loaf is the Vegetarian’s answer to  meat loaf.

I found the recipe on Pinterest.  You can find on my Main Meals board by clicking here.  If you want to go directly to the website, click here.  You’ll find the recipe on The Vegan Stoner.

I love the way this recipe is laid out on the page.  It uses approximate measurements and clearly communicates that this is a forgiving recipe.  I don’t know about you, but that works for me!

Lentil Loaf by The Vegan Stoner

The first time, I followed the recipe pretty closely.  I used frozen mixed veggies and garlic powder.  It was pretty good.  It held its shape when I sliced it and it was the satiating, healthy meal I had hoped it would be.  This was the final product.

The second time I decided to get more creative.  ( I was also much more diligent about taking photos!) Instead of frozen veggies, I sauteed the onions with red pepper and mushroom and garlic. 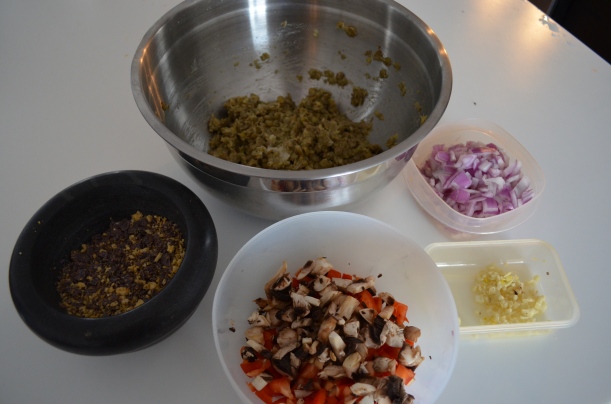 Most of the Ingredients for the Lentil Loaf

I used gluten-free crackers and chips, which I crushed using a mortar and pestle.

I also used an organic vegetable spread instead of some of the ketchup.

Sadly, the second time I made this, the loaf didn’t hold together as well as the first time.  It tasted great and was very filling, but I think it needed some more oven time and a bit more time to rest before we dug into it. 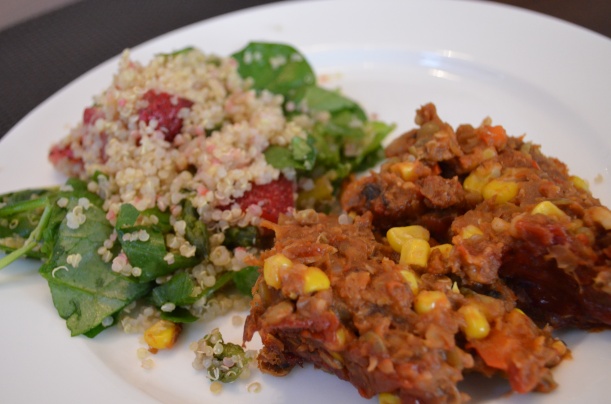 Lentil Loaf with a side of Quinoa Salad

I’m definitely going to make this again.  Though we probably cut it before it had a chance to settle into a solid loaf shape, it tasted great.  The best part was when my husband told me he liked it and even better, asked me when I would make more!

Do you have suggestions for the veggies I should include in it next time, or other variations for that matter?