Babies can definitely have a different palette than adults.  Not only is it different, it changes over time.  When you’re trying to prepare food for a baby that has limited ability to express himself, this can be a challenge!

I started giving solid food to my little guy at around the six month mark.  At first, he didn’t know what to do with the food.  Though he would be busy “chewing” any time he saw someone else eating food, when I finally give him his own food, he was a bit bewildered.

After a few tries, he got the hang of it and we were off to the races.   He started with brown rice and then quickly moved on to pears, sweet potato, carrots, and apples.

If you follow my blog, you would probably guess that I was determined to make my own baby food.  For the most part, I have and I feel really good about knowing exactly what I am feeding him.

Baby Food on the Go

That’s not to say that he hasn’t tried lots of store-bought organic baby foods.  They are easy to tuck into the diaper bag and also give him a chance to try new flavours.  In some cases, I have used the store-bought foods to introduce him to a new taste before cooking up a bunch of it myself.  My favorite brands of baby food are Baby Gourmet and Ella’s Kitchen.  Both use organic ingredients.  I also like supporting local businesses and Baby Gourmet is one of those for me.

Making My Own Baby Food

Once I knew some of my son’s favorite foods, I started combining them into different purees.

One of the first combinations I made for him was a roasted vegetable soup.   I roasted some butternut squash, some onion, some garlic and some carrots.  I mixed the roasted veggies with water and some cooked quinoa.  Finally, I blended the whole thing to make a smooth puree.  My son loved the vegetables and I was happy to have snuck some quinoa into the mixture for some added goodness.

Another favorite of his is butternut squash with onions.  Not only is it his favorite, it’s actually one of mine!  I pan fry the onions in a little bit of coconut oil until they are browned.  Then, I add the cubed butternut squash and some water.  I let that cook on low until the squash is soft.  I season it with cinnamon and salt.  It’s a really simple dish that is both healthy and tasty.  In the beginning, I would puree it for him to make it easy for him to eat.  Now that he’s older, I just mash it up with a spoon and he can handle the rest.  Here’s a photo of a fresh batch (unmashed) I just made this morning.

The trick to making baby food in advance is to freeze it in little cubes.  Each cube is approximately one tablespoon.  My son starting by eating just one tablespoon at a time.  Now, he eats closer to 8 or 9 tablespoons of food in a meal.  Here’s some cubes that I made a little while ago.  I left them in the tray a bit too long and it looks like they’re getting a case of freezer burn.  Whoops! 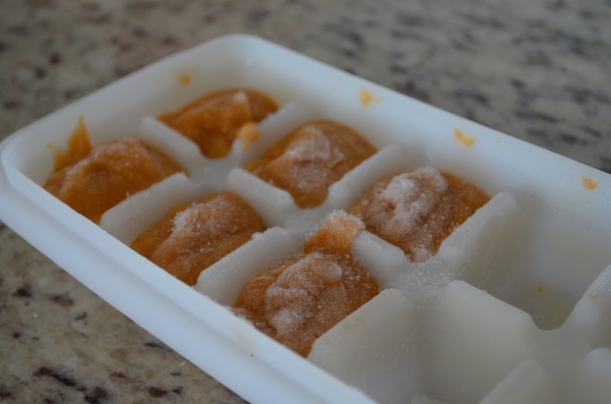 Other favorites for my little guy include any kind of fruit, apple sauce, pear sauce, apple/pear sauce…, Well, you get the picture, right?

Finally, I couldn’t resist posting a photo of my little guy in action.  He really loves his blueberries and raspberries too, no matter how messy it gets! (Thank goodness for bibs!) 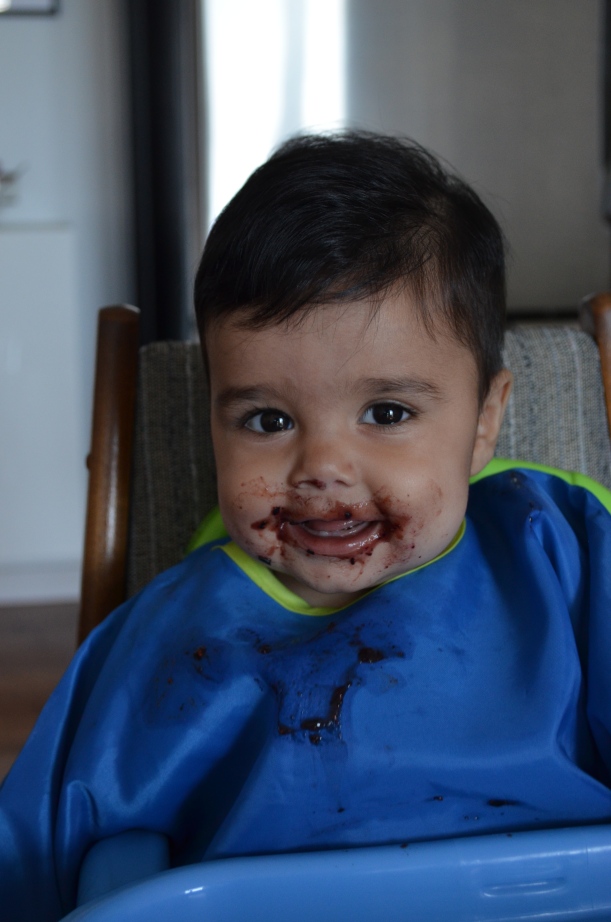